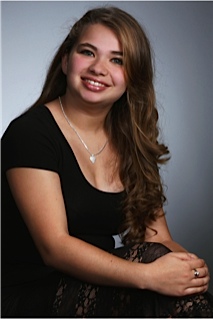 Natasha has beed involved with the arts from a very early age, participating in music classes as young as two years old. From age 6, she studied violin. Her main teacher, Mary Ann Mumm,  was a 17 year veteran with The Metropolitan Opera Orchestra. Before attending  the Conservatory of Music at SUNY Purchase,  Natasha was first violinist with the Northern New Jersey Youth Orchestra under the direction of Mr. Todd Van Beveren. Prior to this, she was a member of the Essex County Youth Symphony and Chamber Ensemble for two years. Natasha participated in the ASTA Chamber Music Institute summer Camp at both Kean and Rutgers University for the past five summers. On November 16, 2013, Natasha was one of four violinists from Morris County NJ honored with “student of the month” awards presented at an Itzhak Perlman concert.

While studying  violin, Natasha also enjoyed singing very much  had the honor of being selected as a soprano  with the 2014-2015 NJ All-National Honor Mixed Choir  performing at The Grand Ole Opry in Nashville, Tennessee. She also performed with the 2014-2015 NJ All-State Mixed Choir, 2013-2014 All-State All Women’s Choir, Region 1 Mixed Chorus (2013-2014) and Region 1 Women’s Chorus (2011-2013). In May of 2014, Natasha began studying voice with tenor, Martin Bakari, and immediately knew that  she wanted to pursue a career in Opera.   Mr. Bakari  prepared her  for auditions and she was accepted by the Manhattan School of Music, Westminster Choir College and several other prestigious schools.

Classical voice/Opera:   Natasha Scheuble, soprano,  is currently a junior in the Conservatory of Music at SUNY Purchase studying  with Kaori Sato.   In the Opera program, she  has appeared as Amahl in Amahl and the Night Visitors, and Damigella in L'Incoronazione di Poppea.
In productions of Italian and German scenes, she appeared as Susanna  (Le Nozze di Figaro), Carolina (iL matrimonio segreto), and Erste Dame and Pappagena (Die Zauberflote).   Most recently, Natasha appeared in the  fall 2017  "Classical Broadway" (SUNY Opera production) as Maria, ("Tonight Quintet" from West Side Story) and Kathy ("You could Drive a person Crazy"  from Company).


As a jazz vocalist, Natasha was honored as the 2014 International Women in Jazz “Youth in Action” award winner. She performed at the award ceremony held at St. Peter’s Church in Manhattan on May 10, 2014.  Late the previous year, Natasha and her sister Leonieke (pianist/organist) were recorded by Rudy Van Gelder, a grammy award winner regarded as one of the most important recording engineers in music history. Jimmy Cobb, veteran of the famed Miles Davis Quintet with John Coltrane, provided the drumming on Natasha’s tracks. This recording entitled “Debut” was released on January 1, 2014 and since has been added to the house music system at the famed New York jazz club, Birdland. In August 2016, she recorded several tracks on Leonieke's follow up recording, "Live in the Studio".

Besides her work singing regularly for several churches in the Westchester area of New York,  Natasha she   has sung at  Shanghai Jazz,  Hibiscus,  St. Peter's Church (Manhattan),    Silvana and Nuyorican Poet's Cafe.  Following a performance at a New Jersey jazz club, Trumpets in June 2014, Natasha and Leonieke were asked by Scot Albertson, artistic director of Project 142 (www.project142.org) to present additional performances at Symphony Space, The DiMenna and Kitano .